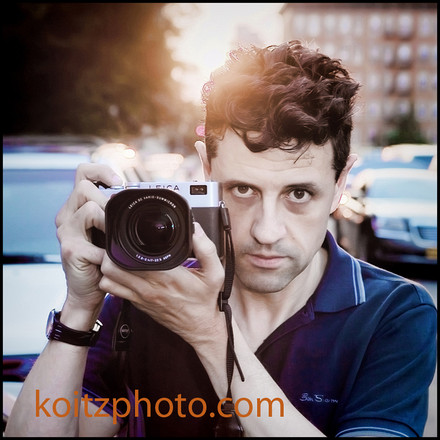 Born and raised in the Basque Country, Koitz moved to New York City in 1994. Since then, he has pursued his photography studies at the School of Visual Arts and the International Center of Photography. He has participated in workshops led by photographers including Neal Slavin, Harvey Stein, and Greg Gorman, among others.

In the late ’90s, Koitz began to photograph off-Broadway theater productions. Many of these photographs appeared in New York media, including the New York Times, the New York Daily News, Time Out and the New York Post.

In addition to photographing architectural and interior design work, Koitz is known for his photographic portraits of artists, including a cover portrait of Jeff Koons and photographs of Marina Abramovic for the Madrid-based cultural magazine Ars. He has recently shot the private collections of several collectors in New York City and Massachusetts for Ars.

Koitz has also covered New York City nightlife extensively, and this work led to his working for four years for The Fire Island News, where he photographed multiple events in both Cherry Grove and Fire Island Pines. This focus on activities and people in the two notably gay communities of Fire Island has given him unique access to people, places and moments few outsiders ever see. These photographs are the theme of an upcoming book project.

Koitz’s photographs have been sold at the Design on a Dime photography auctions organized by New York–based nonprofit Housing Works to raise money to fight AIDS and homelessness.

In 2015, Koitz received the Founders Cultural Award, which sponsors underrepresented artists from diverse communities to produce the exhibition Fire Island: Fun in the Sun, at the Verle Annis Gallery, on the University of Southern California campus in Los Angeles.

In the summer of 2016, Koitz exhibited his photographs of Fire Island at the Cherry Grove Community House in an exhibition organized by the Arts Project of Cherry Grove. "SNAP! – Cherry Grove – One of a Kind", consisted of 26 photographs all taken in the gay and lesbian summer community.

During the summers of 2017 and 2018, Koitz participated in the Artists Tour of Cherry Grove, on Fire Island, during which local artists invite neighbors and visitors into their creative spaces to show, sell, and engage in creative conversation about their work.

Koitz lives in Williamsburg, Brooklyn, with his husband.

What's been said about Koitz's photographs.

Koitz's photography bypasses, or rebounds from, 40 years of emphasis on gritty reality. What was radical is now the orthodoxy; thus to idealize, rather than relentlessly expose, has become radical. Koitz makes a place, an event, and yes, a person, look better than they might look to the naked eye-- or put another way, their best. That's what he likes to bring to light. That's what he seeks to capture, so his pictures are, in a word, beautiful.